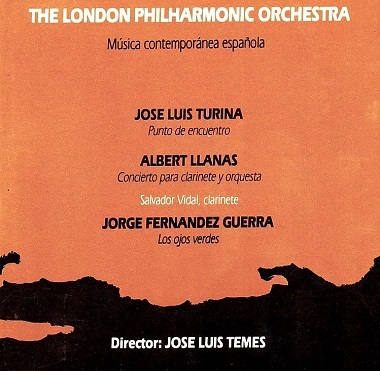 Punto de encuentro (Meeting Point), my first orchestral work, dates from 1979 and arises as a work carried out as a pupil of the second year of Composition and Instrumentation at Madrid Royal Conservatory of Music, the tutelage of Antón García Abril and Román Alís. In essence, it was about developing the Theme with Variations form within a symphonic treatment that would also allow the perfection of the orchestral technique learned during these studies.
In this way, Punto de encuentro consists of a first section, in which the main thematic material is exposed, made up of several elements that will later be developed in a total of seven sections (or variations), which are nothing but elaborations of the different elements exposed in the first one, and whose different treatment and character provide the necessary contrasts for the variety of the discourse, guaranteeing its coherence through the use of a common thematic material.
In 1981, a jury chaired by Goffredo Petrassi and made up of César Bresgen, Ida Gotkovski, Cristóbal Halffetr and Manuel Castillo awarded Punto de Encuentro the First Prize in the International Composition competition organized by the Conservatory of Music of Valencia to commemorate the first centenary of his orchestra. The work was premiered on October 28, 1983 at the Pérez Galdós Theater in Las Palmas de Gran Canaria, by the Las Palmas de Gran Canaria Symphony Orchestra conducted by Reinhardt Peters.

In September 1989 the work was recorded by the London Philharmonic Orchestra conducted by José Luis Temes, and released in CD by Discobi label in 1990. In 1991 the recording was included in vol. 6 of the collection "Contemporary Spanish music" of Gasa label, and in 2008 in the CD "José Luis Turina. A portrait" of Verso label, first CD of the collection "Spanish and Latin American composers of contemporary music" of the BBVA Foundation.
Punto de encuentro is dedicated to Ricardo Uría.

The composer José Luis Turina, has obtained the first prize in the International Composition Competition [Centennial of the] Orchestra of the Superior Conservatory of Music of Valencia with his work Punto de encuentro. The award is endowed with 500,000 pesetas and was instituted to commemorate the first centenary of the founding of the Valencian Conservatory.
José Luis Turina was born in Madrid in 1952, and began his musical studies in Barcelona together with those of Philosophy and Letters, which were abandoned to dedicate himself exclusively to music, and mainly to composition. In this field he has obtained various national awards and his works have participated in the Cuenca Religious Music Week, the Lisbon Contemporary Music Meetings, and performed in Frankfurt, Munich, Rome and Paris.
The jury that has awarded the prize to José Luis Turina, who is the grandson of the famous Sevillian composer Joaquín Turina (1882-1949), was chaired by the Italian musician Goffredo Petrassi, and the score of Punto de encuentro will be published by Jaime Piles Ed. (Valencia). 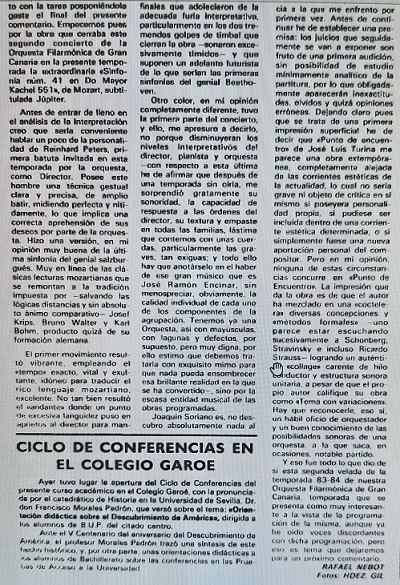 It is really a completely new experience for me, to be faced with criticizing a world premiere of a musical work, and in the same way, I am filled with a feeling of perhaps excessive responsibility for such task. That is why, perhaps unconsciously, I try to delay the confrontation with that duty as much as possible by postponing it until the end of this comment.
[...]
And we already entered what I announced at the beginning of this comment, the review of an absolute premiere, a circumstance that I am facing for the first time. Before continuing, I must establish a premise: the judgments that are going to be presented below are the result of a first hearing, without the possibility of a minimally analytical study of the score, so inaccuracies, oversights and perhaps erroneous opinions will inevitably appear. Making it clear then that it is a superficial first impression, I have to say that José Luis Turina's Punto de encuentro seems to me to be an extemporaneous work, completely removed from current aesthetic trends, which would not be serious or object of criticism in itself if it had its own personality, if it could be included within a specific aesthetic current, or if it was simply a new personal contribution from the composer. But in my opinion, none of these circumstances concur in Punto de encuentro. The impression given by the work is that the author has mixed in a "cocktail shaker" various conceptions and "formal methods" -one seems to be successively listening to Schonberg, Stravinsky and even Ricardo Straus - achieving an authentic "collage" devoid of a common thread and unitary sound structure despite the fact that the author himself qualifies his work as "Theme with variations". It is necessary to recognize him, that yes, a skillful job of orchestrator and a good knowledge of the sonic possibilities of an orchestra, to which he takes, on occasions, notable advantage.
[...]

[...]
It would be pretentious on our part -and we are already talking about last Friday's concert- to make an objective judgment (objectivity, of course, based on personal criteria) of this absolute premiere by José Luis Turina, entitled Punto de encuentro. It seemed to us, in this first impression, a work with undoubted symphonic interest (all that treatment of harmonies, all those contrasts in sonorities between percussion, brasses and woods, all that development of tensions, etc.), that speaks, already by itself, of a well structured work. But the problem, we believe, is in its aesthetic approach, an approach that must be recognized has been overcome in terms of novelty in writing. The eclectic bears witness to the entire development of the work. We hear effects already known in Stravinsky, in Schönberg, to give just two examples. Punto de encuentro wants to be a sensory appeal sometimes -the game of the timbral- and reflective-emotional other times. We do not deny that it succeeds. 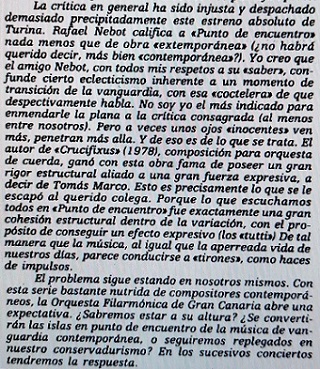 [...]
Between both masters of the past [Liszt and Mozart], the absolute premiere (a fact that has not been sufficiently outstanding) of Punto de encuentro (theme with variations) by José Luis Turina. As it is an event of the strictest contemporaneity, I think it deserves a separate paragraph.
The reviews in general have been unfair and too hastily dispatched this absolute premiere of Turina. Rafael Nebot describes Punto de encuentroas nothing less than an "extemporaneous" work (did he not mean, rather "contemporary"?). I believe that friend Nebot, with all due respect to his "knowledge", confuses a certain inherent eclecticism to a moment of transition from the avant-garde, with that "cocktail shaker" of which he speaks contemptuously. I am not the best person to make amends to consecrated criticism (at least among us). But sometimes "innocent" eyes see more, penetrate further. And that's what it's all about. The author of Crucifixus (1978), composition for string orchestra, gained with this work the reputation of possessing great structural rigor allied with great expressive force, according to Tomás Marco. This is precisely what the dear colleague missed. Because what we all heard in Punto de encuentro was exactly a great structural cohesion within the variation, with the purpose of achieving an expressive effect (the "tutti") in such a way that the music, like the busy life of our days, seems to "jerk", like bundles of impulses.
[...]

Is cause for joy the appearance of a compact disc with an orchestra of the London Philharmonic category and three recent Spanish works that also represent very well their young authors: Punto de encuentro, by José Luis Turina, the Clarinet Concerto by Albert Llanas, and Los ojos verdes (The green eyes), by Jorge Fernández Guerra. The works are excellent and significant, and even more so is the magnificent performance of the English orchestra and the direction of José Luis Temes who, once again, performs an invaluable service to the music of his time.

[...]
Turina's piece is Punto de encuentro. Written in 979 (and premiered in Las Palmas in 1983 by Reinhard Peters with the Gran Canaria Philharmonic Orchestra), it acquires its fullest dimension in this register. The author's first work for large orchestra, the title alludes to a certain formal structure but also, perhaps unconsciously, to the fusion in a personalized concept of the cosmos of reflections and influences that press the imagination of a receptive and at the same time original artist. Turina's absorptive capacity mobilizes his concern towards all aspects of form and finds in the ease of language the best transfiguring response. The variation technique -less apparent than induced as a common thread- fosters the tentacular game of diversity in a single movement that proposes more or less syncretic follow-ups without neglecting the proportions of the continuum. From the solistic reliefs and the spatiality of the small instrumental combinations, to the "massive" sound; from miniaturist graphics to expressive gesture; and from the freezing of contextualized intervalic work in silence, to the verbosity of a great apparatus, Turina develops the presentation letter of a sumptuous and sometimes protean style, which in later works reaches more precise elaboration.

(Score and parts without watermarks available at www.asesores-musicales.com )