Gudrun Ólafsdóttir (right) and the Sonor Ensemble, in a photo taken in 2014

Callada partida was born from a commission by Luis Aguirre, director of Sonor Ensemble and with whom I have been for many years sharing a sincere friendship, to commemorate, with his first performance in April 2014, the first anniversary the death of his mother, Concha Colón, from an emotional sonnet composed by herself on the occasion, in turn, of the death of hers.

Conchita Colón
Given the very special circumstances of the commission, few times like this one have I had the initial sensation of finding myself facing a difficult task to carry out, finally deciding to resolve the conflict (or so I think) letting myself be carried away by the vibration contained in the poem, without entering into aesthetic speculations and placing myself at all times at the service of the intimate, painful and resigned meaning of the sonnet:


Written for mezzo-soprano and a small chamber group made up of two violins, viola, violoncello, double bass and piano, the piece can be performed purely instrumentally, the vocal part being replaced by a clarinet which, far from limiting itself to reproducing it verbatim, reworks the main melodic line in the form of a continuous variation. At the request of Ana María Alonso, from this second purely instrumental version I made during the summer of 2021 a new one, in which the solo part was transcribed for viola, accompanied by a piano reduction of the chamber group of the original version.
Callada partida was composed between the months of August and October 2013, and is dedicated to the memory of Concha Colón.

Program of the premiere of the vocal version of Callada partida (March 25, 2014)

The premiere of the vocal version took place on March 25, 2014 at the Theater of the High Singing School in Madrid, within the International Festival of Sacred Art and with the mezzo-soprano Gudrun Ólafsdóttir as a soloist. 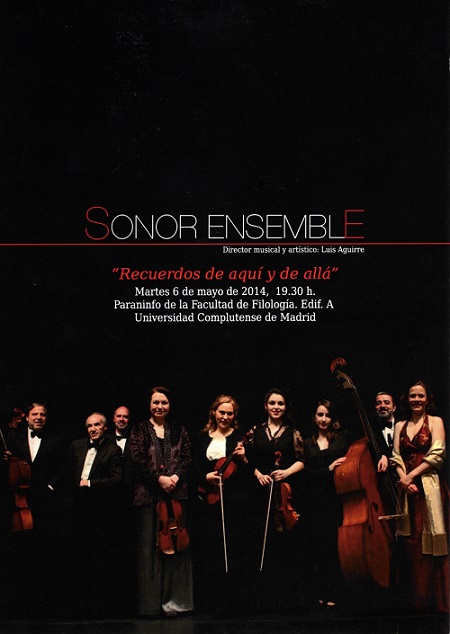 Program of the premiere of the clarinet version of Callada partida
(May 6, 2014)

The version with clarinet, meanwhile, was premiered on May 6, 2014 in the Auditorium of the Faculty of Philology of the Complutense University of Madrid, with Iván García performing the clarinet part. On both occasions the soloists were accompanied by the Sonor Ensemble under the direction of Luis Aguirre.
The versions for Viola and piano (written for violist Ana María Alonso) and for Clarinet and piano are from 2021. The first one was premiered by Ana Mª Alonso and pianist Rubén Yessayan on June 30, 2022, at the Royal Academy of Fine Arts of Madrid, within the concert "Soundscapes (21st century Spanish music for viola and piano)".

(Score and parts without watermarks available at www.asesores-musicales.com )