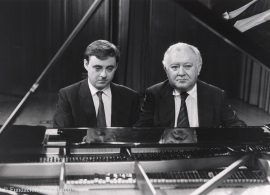 The duo formed by Miguel Zanetti
and Fernando Turina (ca. 1990)

This work was composed for the duo formed by Miguel Zanetti and Fernando Turina, to whom it is dedicated, during the months of January and February 1990. Its very title will undoubtedly reveal to the listener the most outstanding aspects of the work, at least as far as its formal essence is concerned. Thus, the Sonata and Toccata is divided into two basic movements -subdivided, in turn, into a significant number of minor sections that would be both excessive and unnecessary to detail here-. The first of them ("Sonata") responds to rigid structural coordinates (which are not stereotyped, beware: to speak here of a conventional sonata form would be idle), in which various musical ideas are presented and developed, their recurrence facilitating the evocation of a "form" more or less codified and identifiable. The second movement ("Toccata"), on the other hand, lacks this type of structure, basing its development on a series of juxtaposed but not completely independent sections: the references to some elements from the "Sonata" are constant throughout this second part of the work, whose character, as a consequence of all this, is of greater flexibility than the first.
Naturally, the formal is only one of the aspects of the piece: the container. The content aims to go much further, through a constant game of contrasts of all kinds, of alternations between the calm and the agitated, the melodic and the rhythmic, the dense and the diaphanous, and even the atonal and the tonal, which at times it takes over the context, as happens with the "little coral" that forms the basis of the last section of the piece.
This Sonata and Toccata was premiered on April 30, 1991 by the Zanetti-Turina duo at the National Music Auditorium in Madrid, within the 1990-91 season of the Chamber and Polyphony Cycle.

Program of the premiere of the Sonata and Toccata

First page of the Sonata and Toccata

(Score without watermarks available at www.asesores-musicales.com )