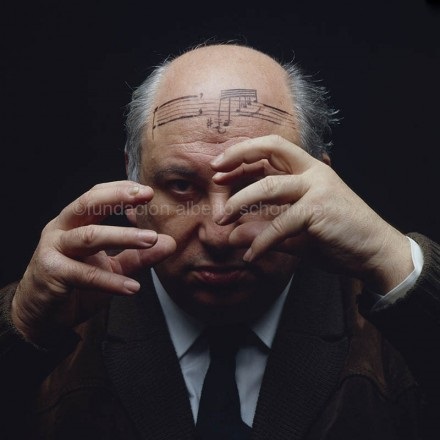 Days of Contemporary Music of Granada, 1999


It is already a happy idea to celebrate Carmelo Bernaola's seventieth birthday with a well-deserved tribute, but I am also very pleased that it is taking place in Granada, because it was precisely in one of the "Manuel de Falla" courses more than twenty years ago, in the classrooms of the almost recently inaugurated Auditorium, where I had the opportunity to approach his profound humanity for the first time and to benefit from his teachings.
The recognition of a magisterium, which makes one consider oneself a disciple of someone, does not lie so much in the fact that one's own music resembles that of the master, as some representatives of the most academically stubborn conservatism and of the most radically conventional avant-garde would like, together, but rather in the awareness that the teacher has known how to awaken in the disciple the necessary stimulus to, through the use and personal assimilation of sensible doctrine, wise advice and a few masterful formulas, develop an authentic and personal way to understand the composition.
I was only a direct pupil of Carmelo Bernaola during the summer courses of 1978 and 1979. I have not worked under his tutelage, therefore, assiduously and continuously; and yet I consider myself his disciple in many respects. My intention, when enrolling in his classes, was fundamentally oriented towards the acquisition of a solid technique of composition: like my classmates, the age -around the early twenties-, the moment -the need to find an alternative to an avant-garde that, at that time, was beginning to enter into crisis- and the general lack of information -the result of some obsolete and nineteenth-century teachings that, even today, resist change-, impelled me towards everything that could provide me with technical resources and aesthetics on which to base a vocation, formless and messy, but clear and determined, as a composer.
Naturally, in my current technical baggage, Bernaola's teachings count -and a lot-. I consider that his ideas regarding the treatment of intervalic material profoundly modified the morphological and syntactic foundations of my musical language, at that time very disoriented, and that this is still perceptible today in a large part of my way of understanding the melodic and harmonics aspects of composition. But what at first began as some very interesting classes on pure and simple intervalic technique, quickly turned into some exciting instrumentation sessions, of the highest level that I have ever known, and from which I tried to extract the maximum benefit; sessions that I remember with special affection and gratitude every time I write, for example, for certain registers of the flute or the horn, or I am forced to use certain notes of the trumpet.
It is fundamentally in this aspect that I feel more like a disciple of Carmelo, from a purely technical point of view. But from nostalgia when evoking those classes and those years, I want to remember that in those instrumentation tips he put a special passion, which penetrated me much more deeply than the wise and objective teachings of the aspects related to the intervallic material and its derivations, because I have only found it in those teachers who not only knew more than the usual treatises, but also showed extraordinary generosity in sharing their knowledge, without any reservations, with their pupils. As a diligent disciple, I have tried to integrate this human factor into my teaching activity, no less important than professional composition.
Without being sure that I have fully achieved it, I would like to at least put on record here that in this, as in so many other things, the immensely wise and humane protective shadow of Carmelo Bernaola is behind it.